Evolution Of The Septic System 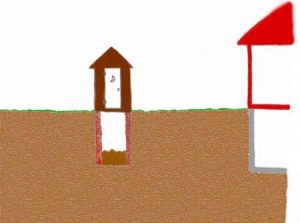 In the early days, when man wanted to have some privacy and protection from the elements when he did his “chores” he dug a hole in the ground, lined it with stone, brick, wood or other available material and built an “outhouse” above. Delivery of the waste to its final resting place was by gravity. If the hole eventually filled up, the outhouse got moved to a new location. 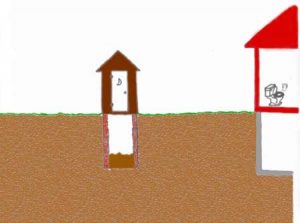 Upon Thomas Crapper’s invention of the flush toilet, man was now able to do his chores in the comfort of his home. 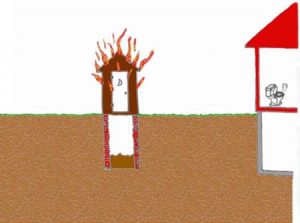 Civilized man was now able to do away with the outhouse, but, because wastes and wastewater needed a place to go… 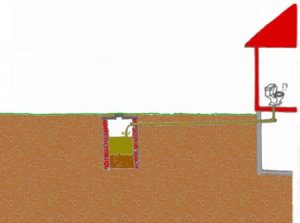 He connected the pipe to the pit that served the outhouse and covered over the hole to hold down the smell and keep the neighbor’s dogs and kids from falling in.

The pit serving the toilet now was called a cesspool.

It soon became obvious that the cesspool often couldn’t handle the extra load of the wastewater along with the waste. 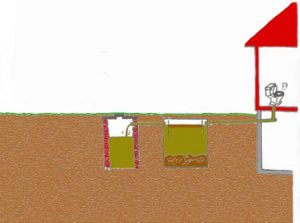 Eventually somebody figured out that by putting a watertight tank in the line between the house and the cesspool, much of the waste could be removed from the flow of wastewater and trapped in the tank where it would decompose.

This treatment chamber became known as the septic tank.

Note that the septic tank has a baffle at each end to help keep waste in the tank. The original pit remained as the part of the system that returned “clarified” wastewater to the ground.

It now became known as a drywell.

Sometimes due to heavy use, poor soil conditions, age of the system or a combination of these factors, the drywell still plugged up. (Wastewater still contains soaps, greases and other stuff that seals the pores of all but the most porous soils.) 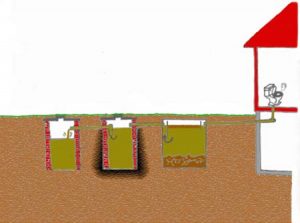 Often a second (or third or fourth) drywell would be installed after the first to increase the soil absorption area. Note that an alert installer would place a baffle at the outlet of the original drywell to help keep floating solids from passing into the new dry well. 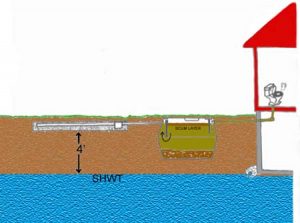 Then when man became concerned about protecting his environment, he realized that many septic systems were built too deep into the ground. There was risk of polluting his drinking water by allowing wastewater to get directly into the water table before it was properly treated by filtration through the soil. In 1967, New Hampshire passed regulations requiring any leaching portion of a septic system (the part that sends water back into the ground) to be four feet above the seasonal high-water table.

This resulted in the switch from dry wells to leach fields, using larger “footprint” areas much shallower into the ground.

About the same time, most installers switched from the old style steel septic tanks to the supposedly more permanent concrete style (shown here). 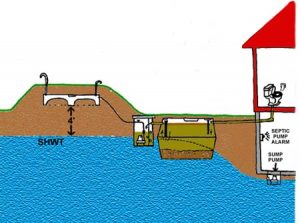 Then as the better land became developed and man was forced to settle on poorer ground with higher water tables, leach fields began to get pushed out of the ground to maintain separation to ground water. In many cases, pumps now have to be installed to get effluent up to these mound systems.

To save space and simplify construction of these raised systems, many new approaches have developed including the use of plastic or concrete chambers as well as other innovations.

If you have a relatively new system that employs one of these modern innovations, chances are that you have a plan available to show you the type of system and its location.

If you have an old house with an unknown type of system, you could be anywhere on this evolutionary chart.

Using the accompanying Troubleshooting Guide should help you determine what type of system you have and also what is wrong with it if you are having a problem.